At the end of November, having an entire (or entirely new) novel to your name is enough of a reward and motivation all by itself. Nonetheless, here are a few things that helped me get through last year’s marathon and might give you that extra shove, too.

Or any assorted candy, really. Last year, for every five hundred words, I broke off a brick from my favorite chocolate bar and savored it slowly as I mulled over what to do with my next five hundred words. This served to set up a reward system in my head, and made it much easier for me to reach my daily goal because it felt like I was writing in small chunks rather than forcing out my sixteen hundred in one go. This also encouraged me, once I reached my word goal, to push myself a little farther to get that last piece of chocolate. A fair warning though, this takes a considerable amount of self-control. 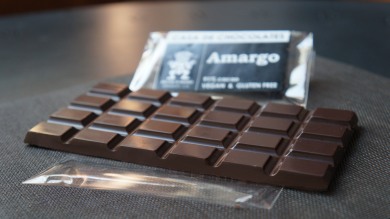 Chocolate is great, but any treat will do the trick. Try adjusting the word goal to suit your own needs… and desires.

No, not music, Sound. I’ve talked with a lot of NaNos that say they can’t work at home to save their lives, and they need the quiet hubbub of a cafe or library to keep them going. And I admit, there is something about being in public that keeps you from being overly distracted. That’s why the internet has given us the magic of Coffitivity.

Nothing makes you feel like writing more than an atmosphere that says “I spend 200 bucks every month on Starbucks.”

Another thing I love listening to while writing is recordings of thunderstorms. Just go to Youtube and you’ll find hundreds of them, with lengths suited to every writer’s needs. The sounds of steady rain, added to music, can really accent the emotion of whatever you might be listening to. I find this very helpful when I need to write a something particularly heart-wrenching. Thunderstorms practically generate adverbs.

Okay, so I wouldn’t employ this tactic every time you pause to jot down a clever one-liner. But last year I went down to the basement and hid in the closet in the storage room in order to write. My reasoning? I had in-laws in town. A lot of them. Sometimes, you don’t need to physically hide, but rather find a way to separate yourself from the mental and emotional insanity of life. I’m still waiting for someone to teach me that one. But in all seriousness, you need to be willing to lock yourself away if that’s what it takes, and finish this novel even at the cost of your dignity.

I’m sure most NaNoWriMos are familiar with the old viking helmet that’s been on our logo for a few years now. Chris Baty, the founder of NaNoWriMo, spoke about how he would sometimes wear a viking helmet when he needed to steel himself and work through a difficult passage. A totem is basically an object you set up only when you’re writing, and it’s meant to make your brain realize that now is the time to write, NOT the time to memorize the lyrics of that Phantom of the Opera song that’s been stuck in your head, but you just can’t get down all the words yet. Really, a totem could be anything, from a stick of burning incense to that weird rock you found last week. Or you could even go Christ Baty and pick out a piece of apparel.

Last year, my inner editor was a huge help to me. Whenever I was feeling discouraged, he would rub his hands together and, while chuckling darkly, say “Yes, continue to write like a fourth grader. My, my, what fun we will having revising this.”

Okay, so I don’t actually hear voices in my head except for Monday mornings. But my point remains. When you’re writing, revel in the fact that your writing is sloppy, poorly planned and pretty much worthless. The fun is getting to go back and make your novel into something worthwhile. But, in the meantime, simply put those words onto the page and be confident that you’re going to come back and fix it later. This part is mostly having trust and confidence in yourself, just like you have confidence today that in a month and a half you’ll have a full novel no matter what the cost.

No, I wasn’t paid to suggest you donate to NaNoWriMo. I also confess that I’ve yet to do it myself. Nonetheless, statistics show (vague statistics that I’ve only heard mentioned and never actually seen) that donors have a higher success rate than those who don’t donate. The idea is that once you’ve donated, you’re more invested in NaNoWriMo and your project, and you have a greater appreciation for the big picture of NaNo, not just your own project. So, uh, here’s a button for that.

I actually plan on donating myself this year, and would encourage everyone with a few extra dollars to do so as well. After all, the only reason you heard about NaNoWriMo was because of the early donations and sacrifices made years and years ago. And if you use the NaNo website, you get a little angel halo around your profile picture, which is way cooler than it sounds.

Hopefully, some of these ideas will help get you guys through the coming November. Just because your family and friends aren’t on board doesn’t mean you’re all alone. In fact, you should be getting the most help from, well, yourself.